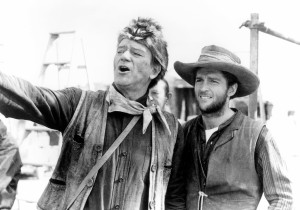 Finis Dean Smith is a American track and field athlete and stuntman, winner of gold medal in 4×100 m relay at the 1952 Summer Olympics.
Born in Breckenridge, Texas, Smith won the Amateur Athletic Union championships in 100 m in 1952. At the Helsinki Olympics, he was fourth in the 100 m and ran the leadoff leg for American gold medal winning 4×100 m relay team. 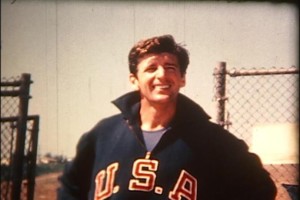 After graduating from University of Texas at Austin, Smith played professional football for the Los Angeles Rams and the Pittsburgh Steelers but never played in a regular season game. After his sports career, Smith performed as a professional rodeo cowboy and stuntman in various Western movies and TV series shows. Dean worked on 10 John Wayne movies! Including The Alamo, The Comancheros, How The West Was Won, McLintock!, Rio Conchos, Big Jake, and El Dorado. 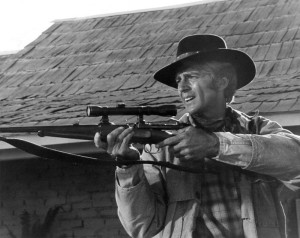 Some of the Western TV shows he has appeared in are Tales of Wells Fargo, Maverick, Gunsmoke, Lawman, Have Gun Will Travel, The Iron Horse and Walker Texas Ranger. In 2006 he was inducted into the Texas Rodeo Cowboy Hall of Fame.
Dean Smith is a member of the Stuntman’s Hall of Fame. In 1997 he was named “All American Cowboy” and in 1998 he received a Golden Boot Award. In 2007 he received the Silver Spur award for his contribution as a stuntman (one of the best) in the film business.

Dean Smith doing a stunt for The Alamo Movie