Don has been in Movies with Roy Rogers , Gene Autry , Charles Starrett ( The Durango Kid ) , and many more . Along with being the Last Little Beaver in the Red Ryder Movies. Don also trained many animals for the movies including the Shadowfax horses for Lord of the Rings. 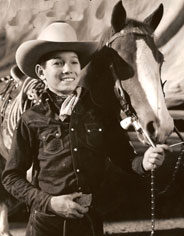 Western Music, Cowboy Songs, Cowboy Poetry and Singing Cowboy Movies that inspire the Old West. Don (Little Brown Jug) Reynolds THE BET THAT WAS NEVER CLAIMED cowboy old west Gunfighter poem. Also so known as Silver Bells and Golden Spurs. Don was in Roy Rogers, Gene Autry, Red Ryder, Eddy Dean and Durango Kid western movies. There were lots of western cowboy songs in those movies so for Don to be a part of Cowboy poetry and western music just seems to be natural. Don performed this poem at the 2014 Cowboy Campfire Tales at the Fort Worth Stock Show and Rodeo. Don also performed his Roman riding and other trick riding stunts as a small boy at the 1941. 1942 and 1948 Fort Worth Fat Stock Show and Rodeo. 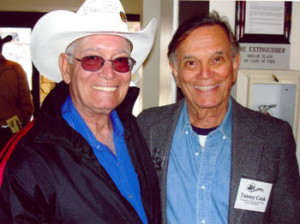 If you are interested in perhaps purchasing one of Dons books or a Limited Edition Red Ryder Little Beaver Daisy BB gun rifle set click on the link for Toy Gun Town . Toy Gun Town handles Dons Autograghed items for sale. Please specify if you would like the item autograghed Toy Gun Town