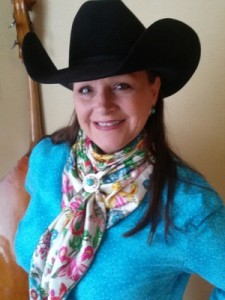 Teresa Burleson is an award winning cowgirl poet whose poems are inspired by her personal experiences, her heritage, and the Western way of life. This native Texan has an appreciation for the agricultural industries and the people who make their lives in it. Her zest for life is evident in her poetry as well as her ability to make people laugh and touch their lives.
Teresa and her husband, Bobby, live in rural Parker County, Texas. They have had cattle and Boer goats in the past, but during the severe drought in 2011 they sold all of their livestock except for their Quarter Horses. They also compete in chuckwagon cooking competitions with their 1898 Mitchell wagon that they restored and preserved to be historically correct. In addition to his day job Bobby makes custom bits and spurs.
Her passion for our Western Heritage is also how she makes her living. Like a lot of people these days she drives to town to work. Her position as the Director of the Stockyards Museum, in the historic Fort Worth Stockyards, allows her the opportunity to promote, perpetuate and educate not only the local history but that of the cattle drives, cowboy and outlaws that passed through Fort Worth.
Teresa was honored to be in the Top 5 nominees for 2013 Female Poet by the Western Music Association (WMA). And she was awarded the 2010 Cowgirl Poet of the Year by the Academy of Western Artists (AWA). Her first CD, The Cowgirl Way, was nominated and in the Top 10 by the WMA in 2009.
Her newest CD, The Legend Remains, was released on July 19, 2013.
For information visit www.teresaburlesoncowgirlpoet.com 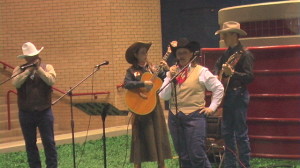