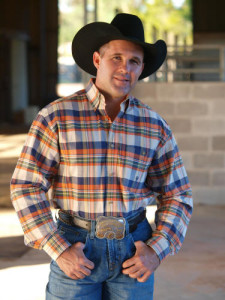 Is a cowboy poet, entertainer, writer and columnist currently hailing from Sealy,Texas but grew up in the wilds of Montana and later in the deserts of New Mexico. Cades father trained racehorses and Cade was loping colts on the track from the age of 12 then started riding bulls and bucking horses in High School and earned a College scholarship to Odessa College in Odessa, Texas. Later Cade acquired his pro card and rodeoed in the PRCA and the PBR then worked for several cattle ranches throughout New Mexico, Texas and Colorado and also shoed a few horses to finance his rodeo ambitions. Cade is a veteran of the U.S. Navy and has been writing and performing cowboy poetry at various events for over 12 years he writes a weekly column for his local newspaper on a variety of subjects, all told from a cowboy’s point of view. Cade’s poem “Looking For America” has achieved some national acclaim and has been published is several magazines and several major newspapers throughout the West.

A comment by Cade – Memories of my grandfather inspired me to write this poem. I think we all have things that have sentimental value to us, whether it be something that has been passed down from generation to generation or something that was given to us by a dear friend, and often times just a glimpse of that object or even the thought of it brings back memories.