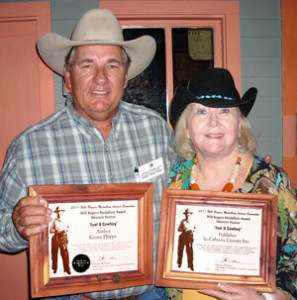 Born and raised on a ranch near the southern Oklahoma village of Woodford, Kenny grew up around working cowboys. One of his earliest recollections is following his grandfather, Alva Fields, into the tack rooms of the Chapman Ranch in the Arbuckle Mountains just north of Springer and its sister ranch near Pawhuska, Oklahoma. The smell of horse sweat and saddle soap was burned into his mind at an early age.
Realizing that growing up in this great nation is an honor, Kenny has been active in his community. He was a charter member of the Dickson Foundation for Excellence in Dickson, Oklahoma. This organization raises money to reward teachers for innovative ideas that stimulate the student’s awareness of the value of education. He was also elected to the Dickson School Board in 2006.

Kenny was diagnosed with Parkinson’s disease in 1999, and he has considered it a nuisance. He started writing poetry in March 2004. Kenny honestly believes that the Parkinson’s issue has been
a blessing, because he began to view the meaning of life differently and became more committed to his family and friends.

See more about Kenny on his official website http://www.kennyphippscowboypoet.com