Award Winning Cowgirl Poet Teresa Burleson is also in the line up for 2015!

Don (Little Brown Jug) Reynolds will be back with us again this year!

Stan Mahler to be performing again in 2015

Stan Mahler to be performing again in 2015. Stan has performed at Cowboy Campfire Tales with us many times and is scheduled to be back with us again this year!

2016 Cowboy Campfire Tales is going to be AMAZING

Don’t miss the 2016 Cowboy Campfire Tales January 25, 26 and 27 at the Fort Worth Stock Show and Rodeo in the WEST ARENA. It is going to be AMAZING! Western Music and Cowboy Poetry …

“This is the best show I’ve seen you put on,” was the way than one fan, who had sat through an entire afternoon show, characterized the Seventh Annual Campfire Tales at the Ft. Worth Stock Show. Record attendance, spirited performances and a through good time by all involved supported that claim. Seventh Annual Ft. Worth Campfire Tales. 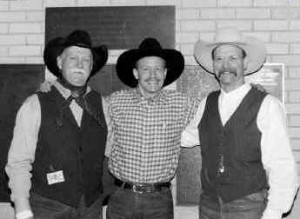 Monday’s show got off to a great start with Dale “Sourdough” Myers, Doc Stovall, Edward Southerland and Lanny Joe Burnett mixing songs, poetry, stories and showmanship in equal measure. The next performers were Janet McBride and John Ingram, always great crowd pleasers. Janet has even taught John to yodel, although sometimes it comes out sounding suspiciously like a Tarzan yell. Chuck Beggs and Carl Condray, two poets with different styles and subject matter but equally entertaining, followed them. The smooth pleasing cowboy songs of Stan Mahler finished the set. It was good to see Stan back in the Metroplex. An added bonus for the fans and entertainers was the MC work by John Buttrum, who has that famous Buttrum voice – and a wicked sense of humor. We hope to see more of John next year.
Billy Joe Rogers lead off the next set with his usual blend of cowboy, swing and traditional western songs, delivered in his fine style. All present were then treated to a special surprise, as John Seay joined BJ Giles in a super performance of songs and stories. What a blend of talent, experience and Western history was on the stage with those two. The only possible performer who could – or would – follow those two is Lloyd Shelby, and fortunately, Lloyd was there and up to the task. Seldom have we heard syntax mangled in such entertaining style. Tim Graham followed with yet another super job. This time, there weren’t even any dogs around to bother him. Tim was followed by Woody, Jessie and the Cowgirls – an entertaining show for all ages presented by Miss Jessie (Devon Dawson), Woody (Bob Terry) and the Cowgirls (Johnie Terry, Brook Wallace and Sally Ann Wallace). Ginny Mac, The Trinity Rose, was joined by Buck “The Big Man” Helton, and gradually, the Phil R Monic Orchestra and Chorus began to form behind them. Anchored by George Uptmon on fiddle and Grady Moss on bass, Devon Dawson and Kristy Ricker filled out one of Phil’s most enjoyable jam sessions.
The day was far from over, as the Wallace Family performed to a surprising large and very appreciative audience. Lead by Paul on rhythm guitar, Brook, Sally Ann, Caleb, Bethany and Maddy just keep getting better and better. Tom Hanshew and Gina DeLaune (better know as Just Gina!) gave a musically pleasing and historically interesting set. The day was closed out by Dan Roberts, who keeps adding to his reputation of one of the biggest talents in the current cowboy movement, as well one of the nicest people.
Day two featured many of the same performers, with some very interesting additions. Rodeo Kate’s Phunky Phiddlers, a group of kids from Strickland Middle School in Ft. Worth, returned with a pretty impressive set. Kate has done quite a job with those kids. They are vastly improved from year to
year, and are surprising dedicated to playing music (especially when they discovered that if you play on the sidewalk and put down a hat, people will actually throw money into it. Way to go, kids!).
Monte Teel added satirical splendor along with heartfelt verse. Some guy named Charles Williams wandered in and they felt sorry enough for him to put him on stage so he could earn enough money for his operation ( which he had and is recovering nicely from, thank you). Kate, Buck, Devon and Doc played an entertaining set together. The Tuesday afternoon Phil R. Monic included Bob Ferguson along with George, Grady, Ginny Mac, Buck, Devon, some of Kate’s Phunky Phiddlers, Harmonica Al, Kate and Rancho Ron in a rousing jam session. The Wallace Family and Dan Roberts finished out what was indeed “The Best Show Ever” at Campfire Tales. Special thanks to photographer Wayne Wolfe for permission to use his photos. Visit his web site to learn more about him and his work: http://www.waynewolfe.com

story and photos by Charles Williams

Another Great Western Cowboy Music and Poetry Gathering at the Fort Worth Stock Show. Planning on posting some pictures soon. Thanks to all Yall have a great year and see ya next time!

Cowboy Campfire Tales 2002 western Music and Poetry Gathering was a great success! Hope to have lots of photos up soon! Thanks to all our great musicians and poets! Hope to see all of you next year. 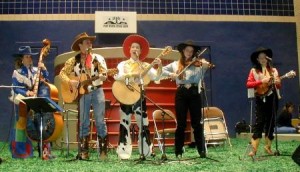 Cowboy Music and Poetry in the new Millennium is still strong. What a wonderful set of shows we had! Days of fun! See y’all next year!

Cowboy Poetry at The Fort Worth Stock Show & Rodeo

Cowboy Poetry and Western Music at The Fort Worth Stock Show & Rodeo for 1999 in the west arena went wonderful. This was the 3rd annual Campfire Tales. Thanks to all the Great Performers and a wonderful audience. See y’all next year!

The First Cowboy Campfire Tales Show Western Music and Poetry Gathering at the Fort Worth Stock Show was approved and will happen during the 1998 Fort Worth Stockshow and Rodeo. Charles Williams and Alvin Davis approached Bob Watt and Mr. Watt gave the thumbs up for the first show to start next year!